Do you ever wonder what once stood on the now empty site on Pacific Coast Highway next to the river as you cross over from Seal Beach into Long Beach? Here's the story of an infamous past:

Ordinance 376, which passed "first reading" April 4, 1949, before its contents were revealed to the citizens of Seal Beach was soon to take effect.  It enabled a gambling monopoly to take over the town permitting only one gambling zone. This one establishment would pay the city $20,000 a year.
Few of those who lived in the city knew what was happening until the Independent broke the news about the hush-hush ordinance which would open up Seal Beach to gambling interests. Two things happened as a result of the Independent's expose: Citizens of Seal Beach started a movement for another referendum petition; officials in Seal Beach moved to hamper free circulation of the Independent. Seal Beach Chief of Police Lee Howard informed the newspaper that Independent newspaper racks would have to go because of complaints by pedestrians that the racks obstructed the sidewalks. The newspaper racks remained because of constitutional right to free speech and citizen support. Citizens won this battle by voting against the measure at a July 12, 1949 election.   They hadn't been fooled by the mild sounding name of the proposal which would have allowed gambling---The Street and Water Revenue Act of 1949. 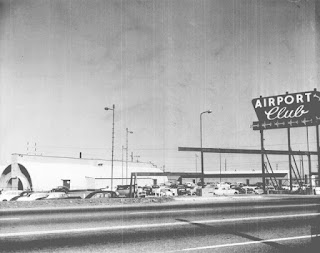 On June 9, 1950, a former policeman, William L. Robertson, along with James V. Arnerich proprietor of the Glider Inn opened a Quonset casino, the Airport Club, in .  A new city council, on the advice of Roland Thompson, city attorney issued a license to the Airport Club under Ordinance 225, the gambling rule enacted July 6, 1939, when Seal Beach was the gambling capital of Orange County. Under this ordinance Robertson and Arnerich obtained a license under a law which provided that operators of draw poker (legal under a loophole in state law unless banned by the community) and other games had to pay a license of $750 a year or $5 a day. Arnerich quickly paid the money to the city clerk. A deal had been struck, but the battle continued.

Robertson, a one-time detective, quit the Los Angeles Police Department in 1940 when Robertson came into quite a lot of “questionable” money.  With $150,000 of this mystery money, Robertson opened the Airport Club along with Arnerich; within the first four months the club grossed $1,148,000.  Since Robertson’s arrival in their town, many citizens wanted gambling and the prostitution and narcotics that went along with it gone from their city. In 1952 voters approved a measure to ban draw poker, but a loop hole allowed Robertson to operate his club for the remainder of its license period.  Just when residents thought the poker parlor was going to be closed, Robertson presented a petition, filed with sufficient signatures, to call for another election to allow gambling.  On April 14, 1953, it looked like Robertson’s forces would win; with seven of the eight precinct votes counted, the poker club had a narrow lead of 739 to 711.  But the final precinct, located in the eastern section of town, swung the election towards the anti-gambling forces. 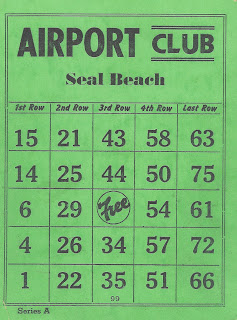 Robertson next approached the Seal Beach American Legion Post asking them if they wanted to “take over” the operation of the Airport Club.  The April election had outlawed draw poker as a private enterprise, but it still permitted private organizations such as service clubs to allow forms of gambling like bingo.  Though sharply divided over the offer, the post agreed.  The Seal Beach City Council saw through the scam and by unanimous vote turned down the proposal from Post 300 of the American Legion to take over the Airport Club when Robertson’s license expired.  After the council adjourned a fight broke out between gambling and anti-gambling forces.  Norman Kellogg, former president of the Good Government Group, charged that several men whom he identified as Airport Club guards pushed him down the stairs.  sheriff assured Kellogg police protection at his home after the episode was reported.
On May 20, 1953, as a gesture of appreciation for the mourning poker populace, Robertson had ham sandwiches and coffee passed out free shortly after the last hands were played at 11 p.m.  This was the first time the 24-hour club, which had operated since June 9, 1950, had ever closed its doors.  There were a number of gamblers from present, not to offer their sympathies but to take anxious betters by station wagons to where they could legally continue gambling.  One player was disgusted, saying that now if he wanted to play poker he had to go all the way to .  Another man said was better than ; at least there they didn’t talk about rights and end up taking them away like in . Last minute gamblers rushed off with souvenir ashtrays as the magic hour of midnight neared.  The towering neon light with the flashing airplane arrow was extinguished when ’s entire police force drove up one minute after midnight to make sure the voice of the people had been heeded. (Press Telegram 5/21/1953)
Roberson was not one to give up.  He started a recall campaign against Seal Beach Mayor Frank Shufelt and four other councilmen who had voted against granting the American Legion a license.  voters defeated the recall by a 2 to 1 margin (Press Telegram 9/18/1953). Robertson’s next move was to start his own weekly newspaper which published reasons why the poker palace enterprise was good for the city.  Attempts were made to reopen it as a private club, civic enterprise and a public corporation, but all proposals were rejected by the Seal Beach City Council.

Eventually mushrooming suburbia would do what no anti-gambling citizen could do --- convince Robertson the gambling era had faded forever in .  By September 1959 had added an additional 1,500 people, swelling the city’s population to an estimated 6,500 people.  These new middle class families, whose homes flanked the old Airport Club on two sides, formed a solid bloc against any proposals to revive gambling.  Robertson, however, had still come out a winner, having obtained extensive real estate holdings in the area during the heyday of his gambling hotspot on .  The poker king had become a real estate tycoon. But he was not to give up . In 1964 he turned the Airport Club into a teenage nightclub named the Marina Palace which despite allegations of immoral conduct and lack of supervision, stayed open until 1974 when the lease ran out. The Quonset buildings were torn down in the fall of 1975.  The site remains empty to this day. 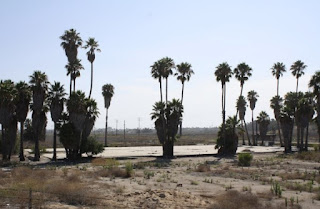 Claudine Burnett
My latest book "The Red Scare, UFOs & Elvis: Long Beach Enters the Atomic Age has now been published (July 2018). In it you will learn about life after WWII, the baby boom generation, fear of atomic attack and Communism, mystery submarines off the So. Cal. coast, the birth of rock 'n' roll, UFO sightings and alleged abductions in So. Cal., and the truth behind Roswell. For more go to my website www.claudineburnettbooks.com